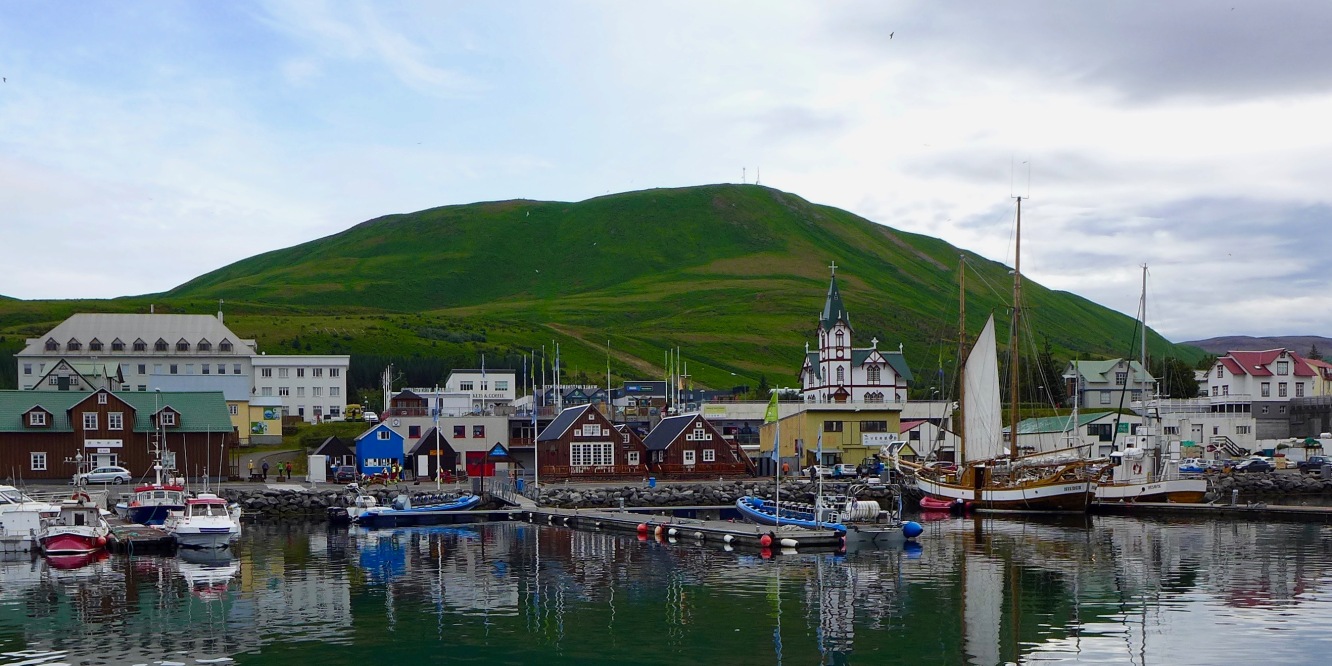 Two things seem to happen when I go whale watching: I always see dolphins, and I never see whales. Every time! I was hoping my luck would change now that I was in Husavik, Iceland’s whale watching capital.

In addition to whale watching, today’s to-do list included eat-fish-&-chips and have-an-awesome-fantasy-football-draft. I pulled off two out of three and all on 30% camera battery. Not bad, right?

My Saturday was being spent in Husavik, a village on Iceland’s north coast a few miles shy of the Arctic Circle. I slept in, grabbed breakfast, and packed my day pack. While doing so, I realize that I forgot to charge both my camera battery and my phone. I was at 30% and 20% charge respectively. But there was no time to fix the problem; my whale watching boat departed in 20 mins!

I make it to the harbor in perfect time, dock our vessel, the Náttfari, and suit up! Boating in the North Atlantic can get cold, so there are insulated and waterproof suits passengers put on to stay cozy.

The Náttfari heads out into the Skjálfandi Bay, passing the Húsavikurviti lighthouse and getting great views of the Víknafjöll and Kinnarfjöll mountain ranges. An empty Puffin Island could be seen just off the coast, as well as Grímsey, a small island straddling the Arctic Circle.

While keeping an eye out for whales I look down onto the water and a whitish blob is floating near the boat. I almost shrugged it off as trash, but this is Iceland. There isn’t a bunch of trash floating everywhere. So..what is that? Wait, is that? Yeah… yes it is. That’s a jellyfish! A moon jellyfish to be precise. Wow! My first jellyfish in the wild!

A bit later, with still no whale sightings, I see an orangish-red thing floating in the water. This was another jellyfish and it was even bigger with more distinct tentacles than the white one I saw earlier. My brain was startled. Not only does Iceland and the North Atlantic have jellyfish, there’s more than one kind? Yep! These larger creatures are lions mane jellyfish.

My amusement of jellyfish was quickly cut off when our guide announces a whale blow mist off in distance. Wow, first jellyfish and now I may actually get to see a whale in the wild?

We head out towards the short-lived sighting. I don’t see anything… the water is calm…. There’s noth…

WHALE! There’s a whale!! I am finally seeing a whale!! I was seeing a Humpback whale to be exact. He was in the bay for feeding season. Humpback feeding behavior is to surface for breathing a handful of times and then do a deep dive. This is when we may get lucky enough to see them. And I was lucky today!

When a humpback whale comes to the surface for breathing, the blowhole pops out of the water, releases air, and then renters the water with the humpback fin surfacing as the whales reenters the water.  We watch the whale breathe and show his fin about three times before he does a deep dive.

A deep dive looks similar to the breathing motion at first, then more of the whale’s back body surfaces, including the tail, due to the whale’s steeper body angle. Once the whale deep dives, he can be under water for up to 40 mins. Thankfully, they usually only deep dive for five to ten minutes, so we wait for our whale to resurface. Sure enough, after a few minutes, he reappears further down the bay! We chase after him. 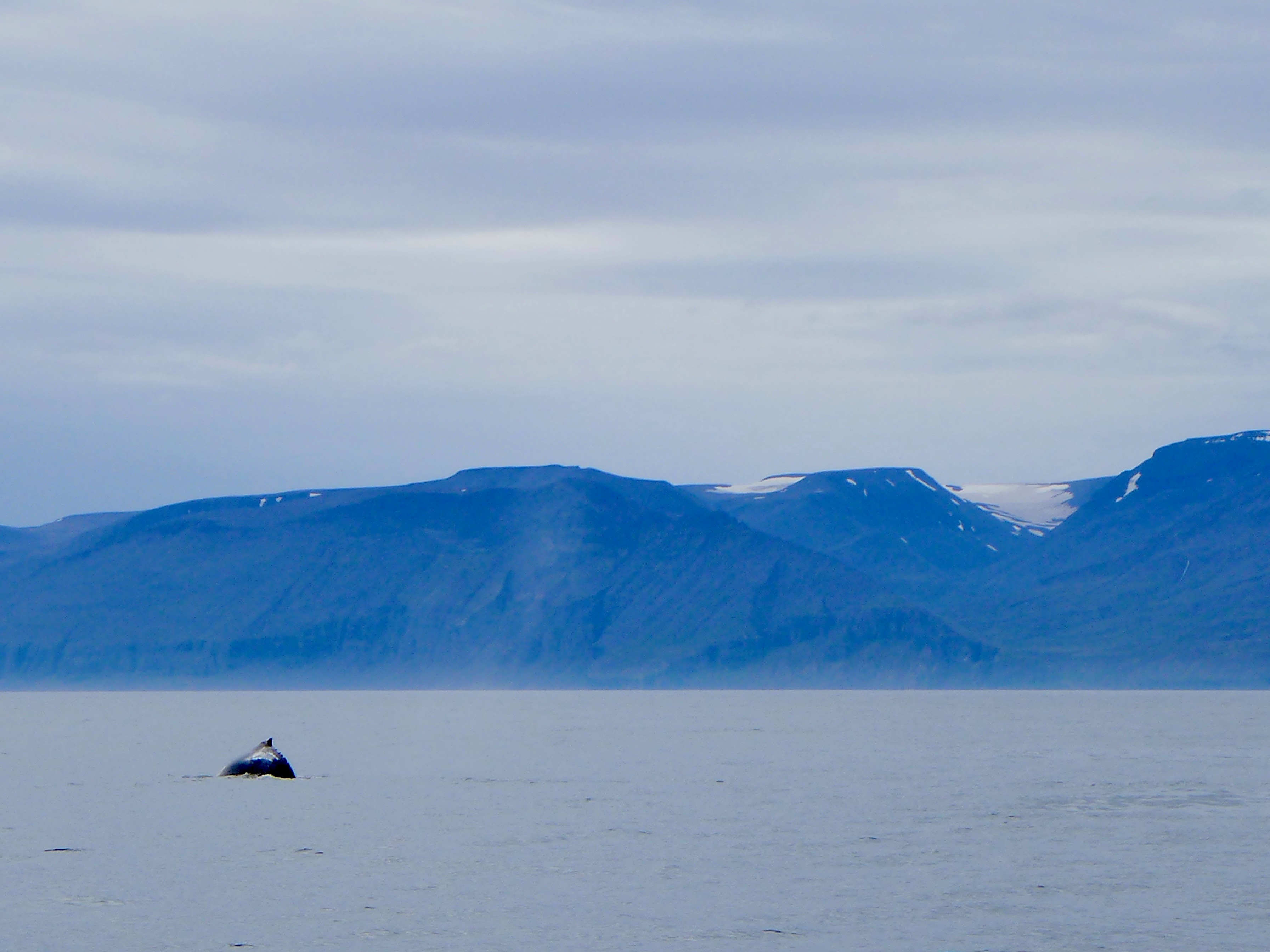 Some dolphins appear during the whale’s second deep dive. After a glance at them, the captain decides to let them swim away and stay with the whale for another round of breathing and deep dive. I agree on prioritizing the whale, but um, I saw dolphins… my perfect record of dolphin sightings continues!

After we watch the whale’s breathing routine for thirty minutes or so, the captain decides to join another boat further north. This second boat had found a pair of humpback whales. Humpbacks are solitary animals, but here were two! It was awesome seeing two together because as one would deep dive, the other would surface. At one point, we had one on each side of the boat.

As expected, my iPhone had died shortly after the first whale spotting and now that we were near two whales, my Lumix camera was flashing its final warning. This is it. The last of my juice. What do I do?

I decided I had enough pics and switched to video. Bam! Got our closest encounter yet on film!

I immediately cut off the video the moment the whale indicated his deep dive in an effort to preserve battery. I wish I hadn’t because the second whale not only reappears, but popped up in the same shot even closer to us two seconds later. I press record asap and pray the battery holds.

I reflexively yell, “yes!” with a simultaneous aerial arm pump the moment after I hit the stop button. The guy next to me looks at me and smiles. That’s right Mr! I finally saw whales in the wild and got our two closest encounters on film despite facing a dying battery. Whoop!

I know the videos are short, but in my heart, they are the best shots I got all day. That and this photo. 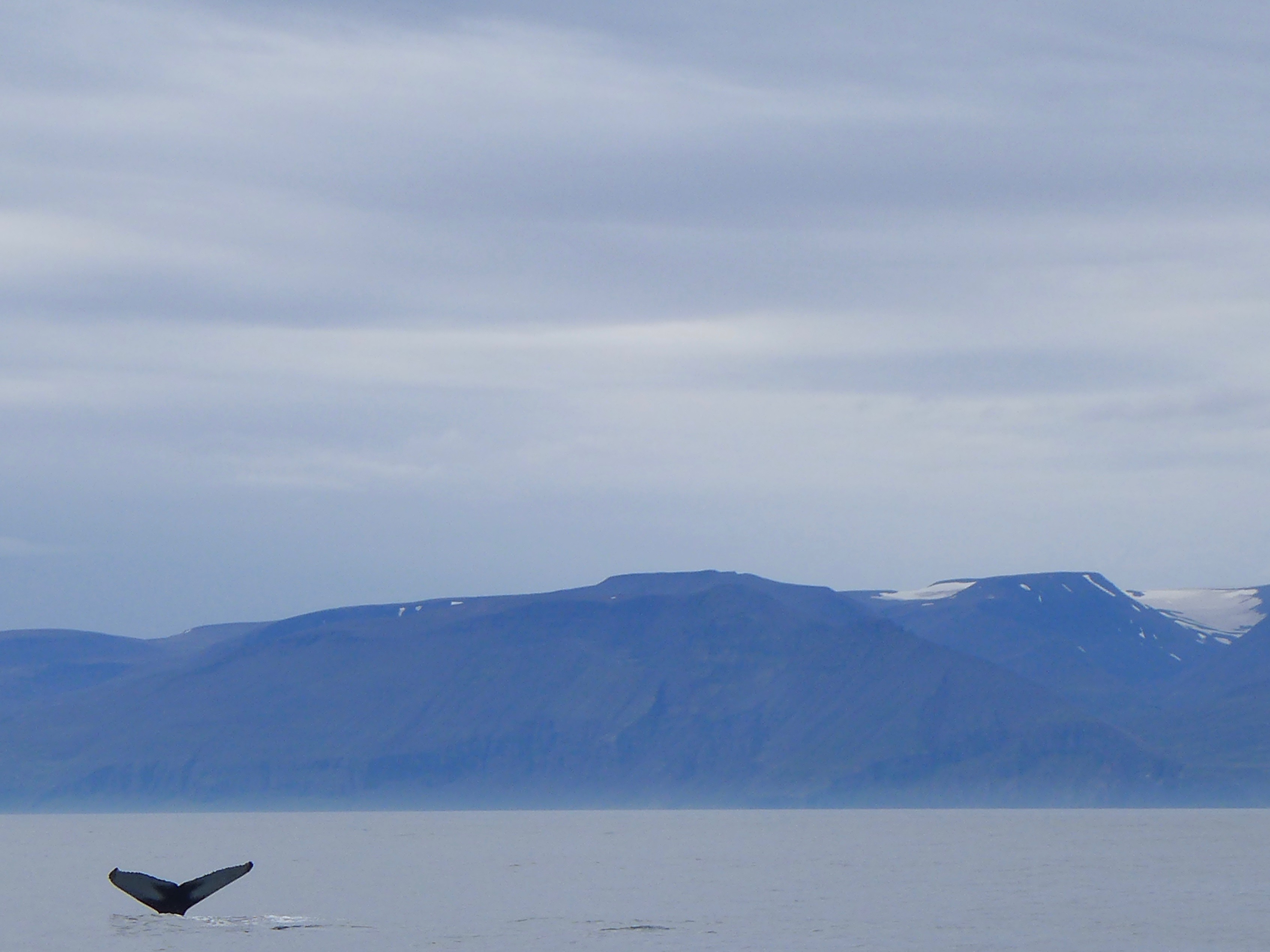 The crew served us hot chocolate and a cinnamon bun on the way back to port. I spilled my hot chocolate on myself looking for more jellyfish. Eh, small price to pay to the adventure gods. Nothing can ruin this high. 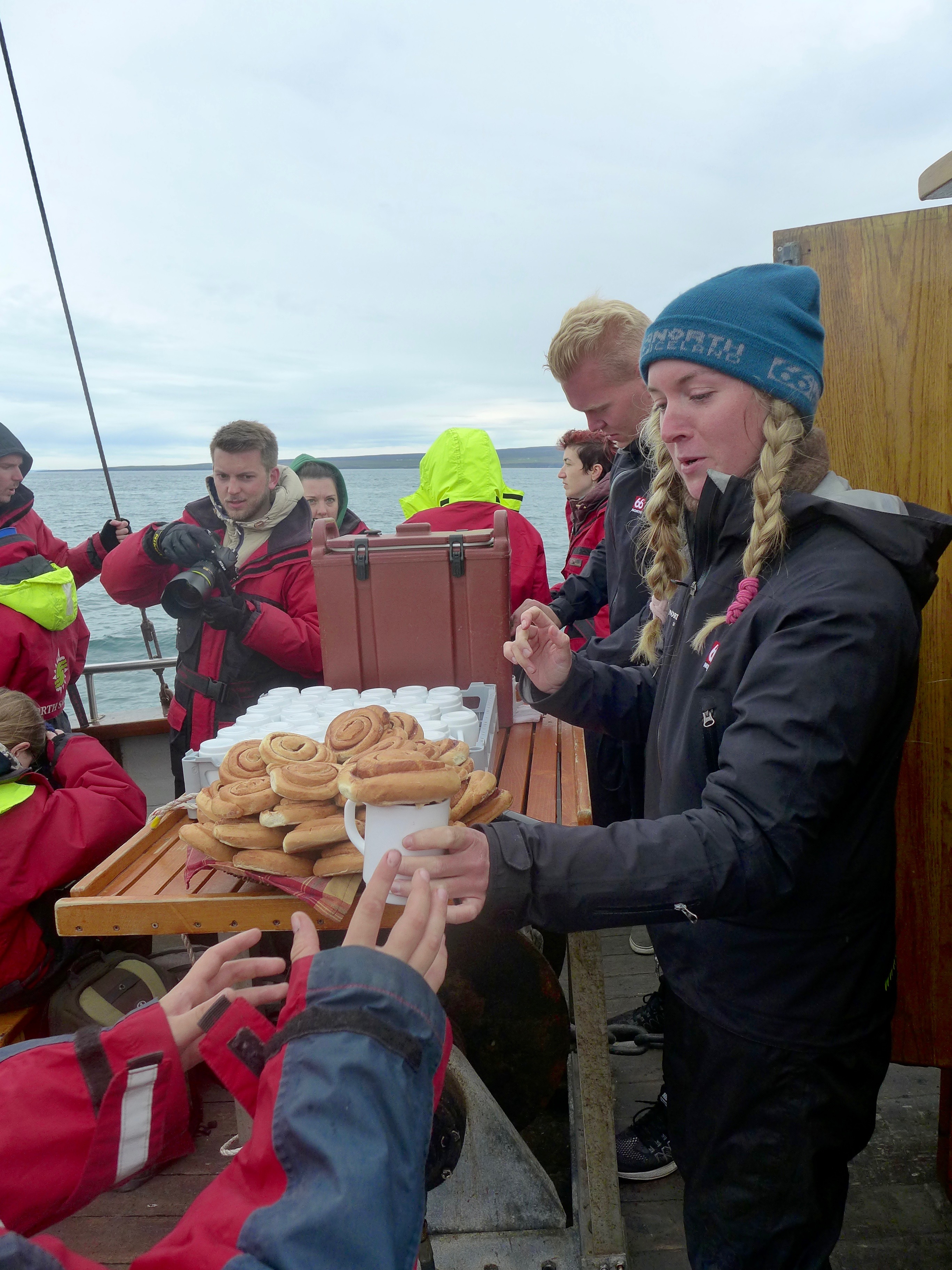 Suddenly, the guide calls our attention to two birds passing by. They were puffins! While they merely looked like two black birds flying to me, dammit, I saw a puffin! As if today could get any better.

I was euphoric as we returned to Husavik. Today’s sighting were truly dear to me after having tried so to see whales so many times before. Seeing whales, puffins, & jellyfish felt like a dream come true. Of course, keeping my perfect record of dolphins sightings was pretty sweet too.

I climbed up to the small lookout at the top of the boat to soak it all in and get a view of the village – Oh, there’s the fish and chips place I was looking for yesterday! I decided I’d grab some fish and chips at the harbor while I let the camera battery charge.

I had held a whale tooth and learned little fun facts aboard the ship and was eager for more intellectual stimulation, so I headed to the Husavik Whale Museum after lunch. 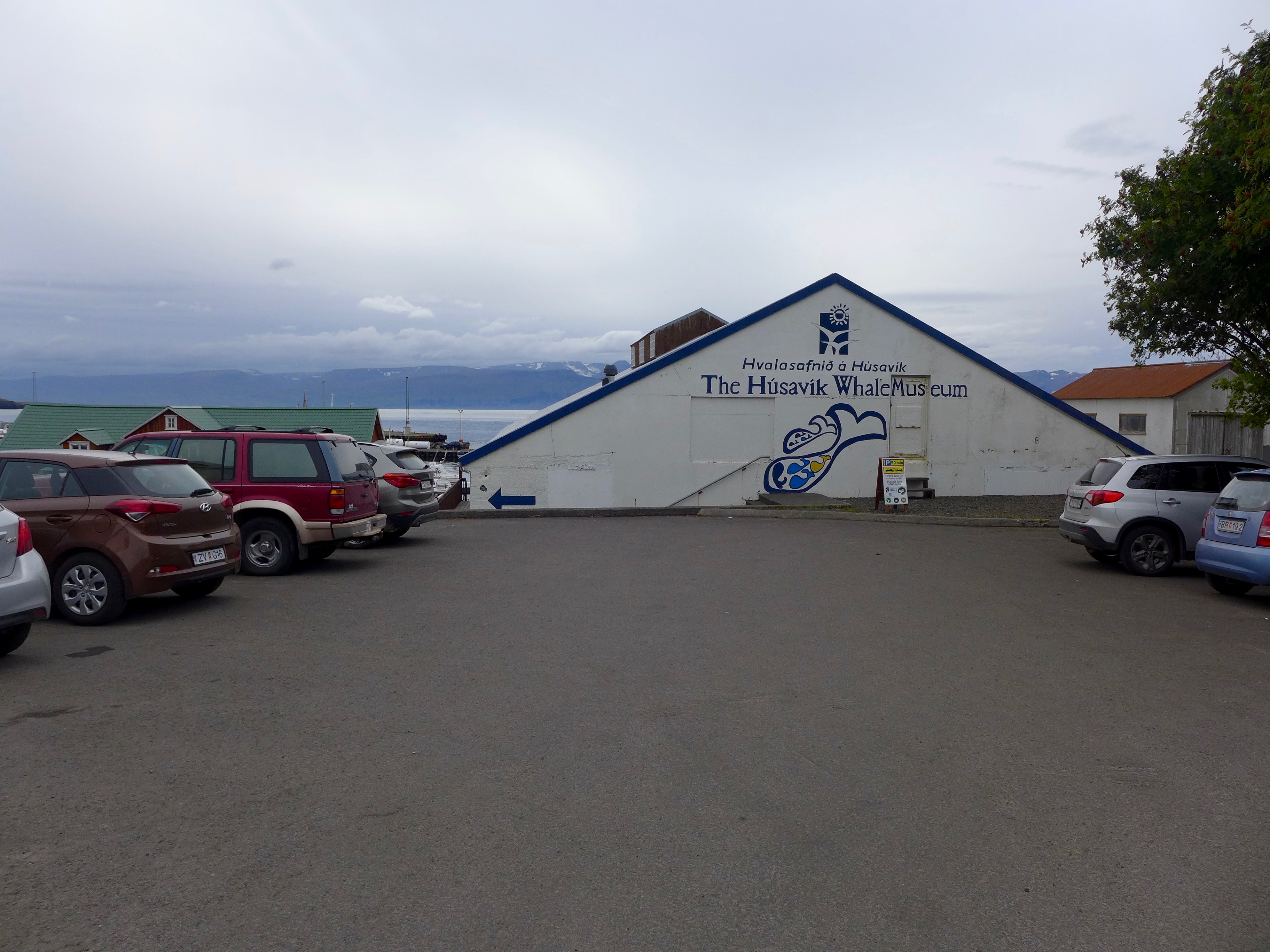 Husavik is not only the whale capital of Iceland, it is one of the major whale authorities in the world. The local whale experts are often called whenever whales beach anywhere in the world. Some of these beached whales’ skeletons are preserved in the Whale Museum, including the skeleton of a Blue Whale, the largest mammal in the world. The skeleton was so large, I couldn’t get it to fit in one pic. I couldn’t imagine swimming next to one of these creatures in the wild. 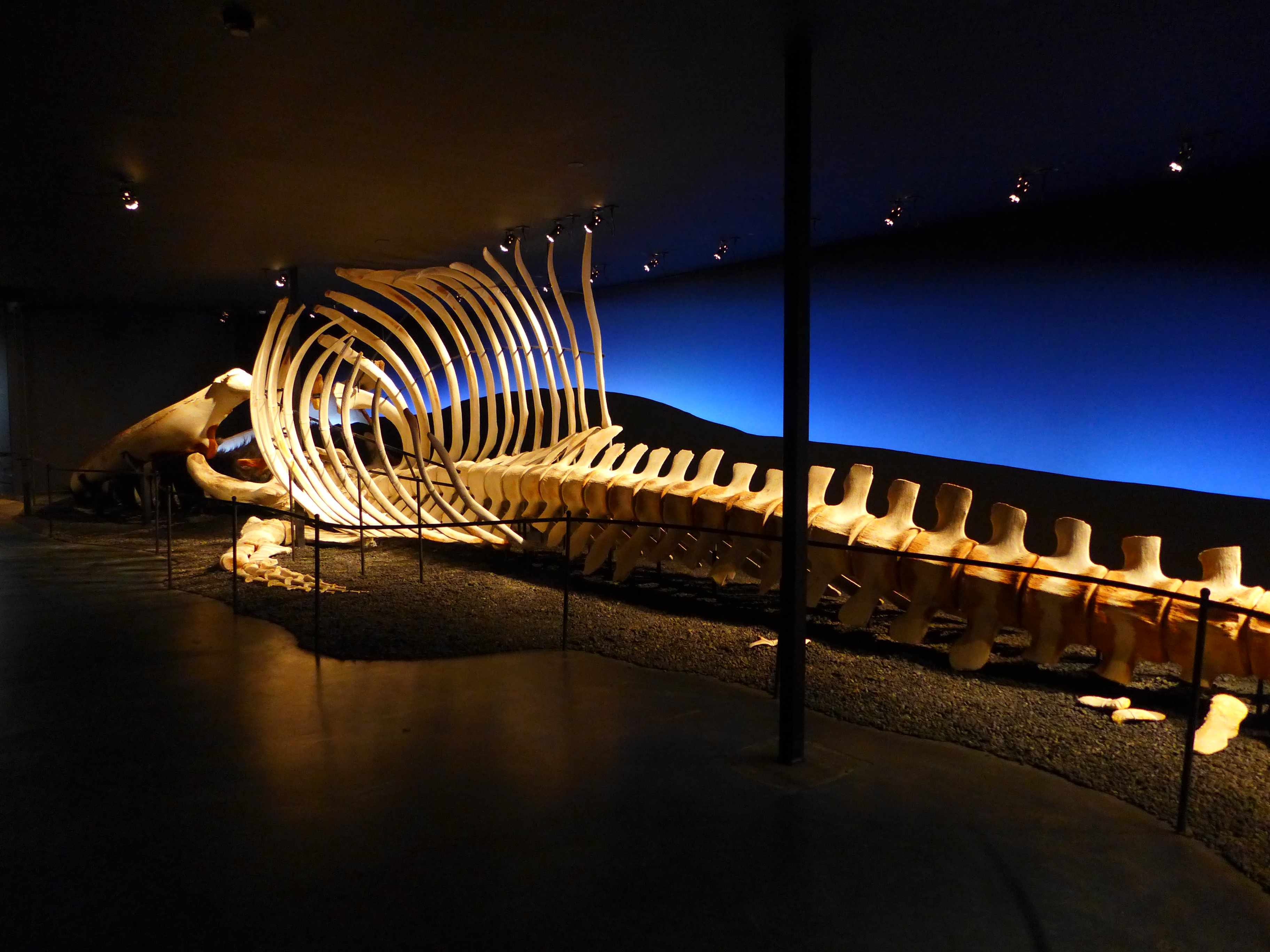 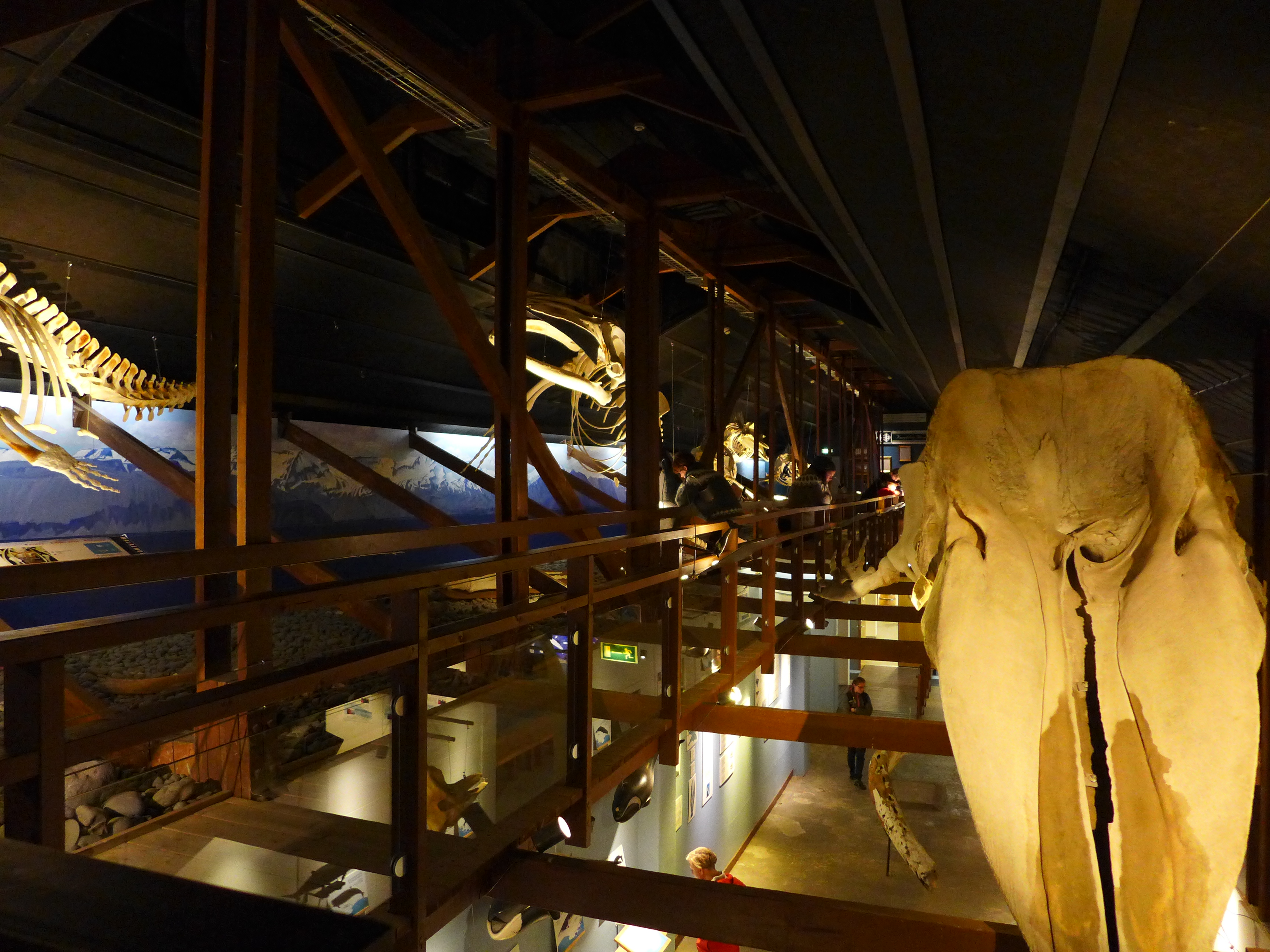 I learned a lot about whales and their history in the museum. Including how narwhal horns used to be sold as unicorn horns to unsuspecting Europeans and the effect sonar has on whale populations. Perhaps, I have even become a bit of a whale advocate at heart now, too?

As I departed the museum, it began to rain. Perfect timing. My fantasy draft was starting in an hour. I cozied up in my hotel room, opened a bottle of my fav Icelandic beer, and pulled off 20 minutes of draft prep.

My draft was as good as one can expect on 20 mins of prep. I drafted my TE a round earlier than I meant to, then forgot to draft a back-up until three rounds too late. Yahoo gave my draft a B- rating. Not the awesomeness I had hoped for, but I didn’t care. I had had a better day than I could have dreamed of.

I spent the day’s final hours Facetiming Alan and Gambit before heading to bed with a smile on my face… I love Iceland.

View all posts by acaciat