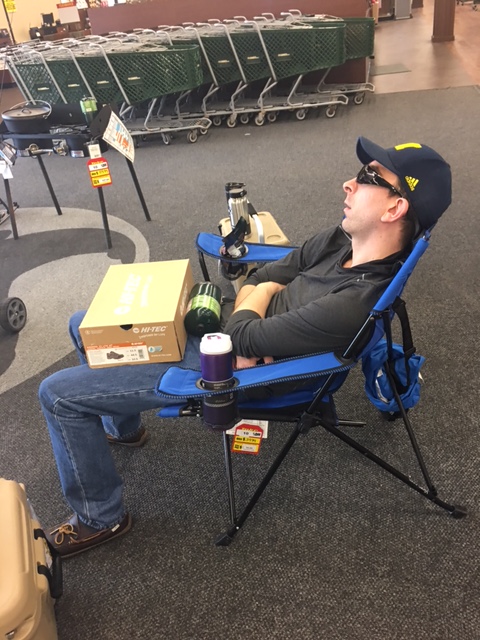 This summer started for us on the Friday of Memorial Day weekend. We were on our way to Door County for the first time, and eager to get out of Chicago before the holiday traffic built up. We made it past the city, to the Eden’s tollway, in good time. Ready to settle in for the long drive ahead, Alan looks down and realizes he’s wearing his house shoes. These durable slippers were far from state park worthy, so I ask if he packed his hiking shoes. He gives me a look mixed with disappointment and shame and says, “No.”

In our rush to get out of the city, Alan forgot all aspects of shoes from flip flops to hiking shoes, except the slippers he was wearing. We had a choice: turn around, return to the city and face certain traffic, or find a new pair of shoes along the drive north. Chicago traffic is enough to scare anyone, so we continued on north knowing we were going to stop at the Kenosha Gander Mountain for me to buy a new pair of Columbia shorts.

I had been on a streak of losing my camping clothes this season and we were only at the start our second camping trip of 2017. First, my favorite lightweight thermal top was gone, and now I had learned that my favorite pair of camping shorts were M.I.A. I was down to one pair of shorts for the long weekend and desperate to avoid wearing pants in the 80+ temperatures. The Kenosha Gander Mountain was where I had purchased this awesome pair of missing shorts for under $20 in a lucky find the summer before. Now that the store was going through their store closing clearance sale I was hoping to get lucky again.

We arrive at the Gander Mountain and I start my search for shorts while Alan searched for shoes. I wasn’t quite as lucky this time, I couldn’t remember the style of shorts I had lost and the clothing racks were less organized. I couldn’t find the size or color I was looking for either, so I had to try on a number of pairs to find one worth purchasing. Apparently, Alan’s quest for shoes ended much sooner than mine did, cause once I decided on a pair to purchase I go look for him near the men’s shoes section.

Shoes department. No Alan. Men’s clothing. No Alan. Camping gear. No Alan. I start walking around the store, and eventually I aimlessly walk to the front entrance. There he is, asleep in the display at the front of the store with his prized pair of shoes resting on his lap…and some propane he found on clearance. #alannaps.

Alan napping at the front of Gander Mountain

Check out those house shoes!

Alan’s new shoes were well utilized along the wet and rocky trails of Peninsula State Park, and my shorts were cozy and comfy for the hot weather. I did find that missing pair of M.I.A. shorts a couple weeks later and Alan gave me one of his lightweight thermals to have. I am happy to report that my outdoor wardrobe is back to full force and ready to take on a full summer of camping and the always spontaneous #alannaps.

View all posts by acaciat